Play Impossible is a startup brand, and creator of an innovative new app-connected Gameball. The client approached Wheelhouse DMG just before their product launch with a problem; they were offered a spot on Amazon Launchpad to jumpstart their product launch but they needed to quickly grow an email list of potential customers in order to have a strong, successful launch.

The challenge was to grow a list of 10,000 email subscribers interested in the Gameball, from scratch, in 4 weeks. They were working with a set campaign budget that included ad spend, product cost, and fulfillment cost for the campaign. 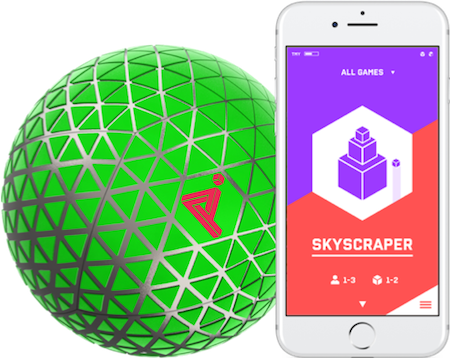 One of the major challenges of a new brand with an innovative cutting-edge product is that the customer targets are not always defined. This was certainly the case with Play Impossible, who had not yet completed any consumer surveys, brand research, or demographic analysis.

In addition to creating an email list of interested prospects, Wheelhouse DMG utilized this campaign as an opportunity to test visuals, video, and messaging across various audiences to discover where the greatest interest existed for the product.

We hypothesized that a significant number of consumers would be interested in the Gameball, if we were able to get pertinent information in front of them. However, generating single subscriber interest would be time intensive and extremely costly. We wanted to make Play Impossible’s audience work for us and help them grow their list in a viral fashion, by sharing with friends and family and encouraging referrals.

Wheelhouse DMG launched a viral referral campaign that allowed users to earn a free Gameball ($99 retail) by simply getting friends and family to sign up. Prizes were guaranteed at various tiers which encouraged more prolific sharing. Consistent communication created trust and a deeper connection with these new users. 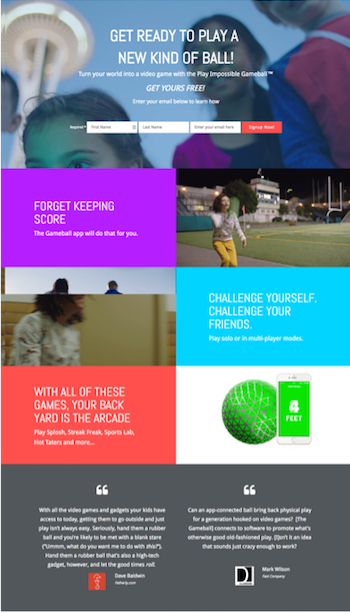 Our implementation consisted of creating 3 separate lead generation landing pages that we could test to see which converted best. (One of which is pictured.) These landing pages each had a different focus:

Each landing page had multiple signup points to encourage signup. Once converted, the user was taken to a landing page that explained the rules of the promotion. There were four prize tiers:

Our thank you page described the referral process. Users could simply share their personalized link with friends and family and for every signup they referred, they would earn points toward a prize. 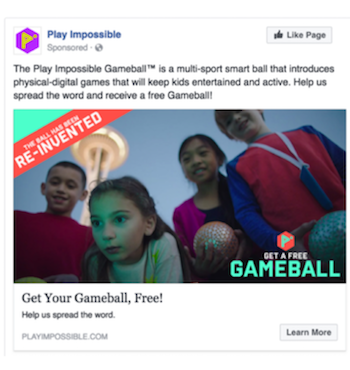 The next phase of the campaign was the social ad campaign creation. We designated a half-dozen different audience groups utilizing demographic data from our client, as well as hypothesized potential targets then created 3-5 variants of image or video, headline, and content for each ad, and began testing them across each of our audience types. We quickly identified the high performers, culled the low-performers, and made iterative changes and improvements to our winning ads, driving significant click through to our landing pages, conversions and driving down the CPL with more refinement.

When users signed up, they were placed into an email workflow that encouraged the sharing of their personalized link by including quick share links and scripts within the email. As each user neared the next tier, they’d receive an automated encouragement email. When users met each tier, they were sent congratulations and the next tier was teased. Users could share their links directly from these emails and through their own social media profiles. Over the course of the campaign, we saw a significant increase in brand impressions for Play Impossible on social media and an increase in followers on Facebook and Instagram as a result. 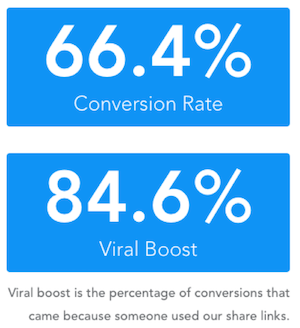 We estimated that the campaign would take 4 weeks to drive 10,000 leads. At the end of the campaign, we were excited to report that we drove 34% more leads than expected in just 2 weeks, in half the time, for less than 1/3 of our projected CPL! Our huge time and cost savings were the result of campaign virality. Nearly 85% of our leads came as the result of users sharing their links!

One user referred 10 users on her own, just enough to win a free Gameball, but her sharing link resulted in more than 4,300 referrals!

Play Impossible was enthusiastic with the results and we immediately set to work on maintaining the happiness of these users by sending out an FAQ email with campaign-related information, followed by a 7-email drip series to span the time between the campaign and the product launch on Amazon. This helped to drive more customer interest by showing the development of the Gameball from concept to design, production and market, answering common questions and sharing user-generated content from excited beta testers.

When the product launched on Amazon Launchpad, Wheelhouse DMG segmented the email list by users who had achieved free Gameballs and those who earned discounts on the product launch, sending the latter their coupon codes for purchase. For our Gameball winners, we sent a compelling email urging recipients to help us spread the word about the Gameball by uploading reviews, images, and videos to Amazon and social media.

The Gameball hit Amazon Launchpad hot, driving an initial round of sales and reviews, allowing the client to pivot next-stage focus to building out site e-commerce for direct sales and wholesale fulfillment.

We’d love to explore your needs and share more learnings from our Play Impossible campaign. Give us a call, fill out our online form, or come visit our office!