The past two months have seen some noteworthy changes to major social media platforms. In this post, I’ll take a look at Facebook’s new status update feature. If you haven’t had time to read up on the ins and outs of the emoticon-based status update, look no further.

Most Facebook users have probably noticed the emoticon smiley face that now appears under the text box of their status bar. This is Facebook’s new “What are you doing?” feature, which is currently restricted to US users. The tool allows you to share what you are currently feeling, watching, reading, listening to, drinking, eating or playing. Select your verb of choice and several options will appear—for example, clicking “drinking” reveals 10 choices and an “add your own” option. Typing in the “add your own” option will reveal if your option has been mentioned or has a Facebook page; if it does, an icon will likely accompany it. For example, typing “Fanta” revealed the following pages: 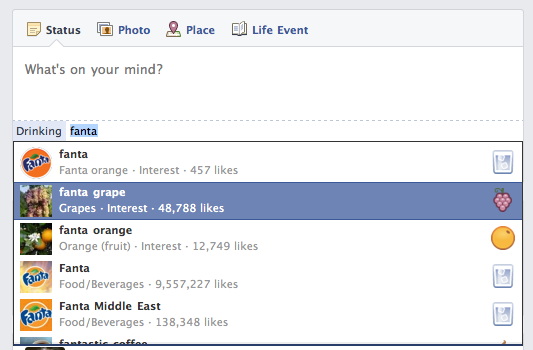 Since “Fanta Orange” does not have its own page (the link is to the Wikipedia page for “Oranges”), the update is purely text with an icon of an orange.

By contrast, if I select “Coke”, which has a well-established Facebook page, my status will show the page’s product description in addition to an icon:

If you choose an option that has never been mentioned on Facebook, you still have a palette of icons to choose from:

My take: This new status update feature should be an asset to companies whose products fit the supplied verbs—it basically provides gratuitous word-of-mouth advertising. As for the user end, I’ll be curious to see if the feature takes off. As of now, you can still link to a product page using the @mention construction, so this new feature is not a huge change from a content perspective. The main difference on the user end seems to be visual. Consider the following:

Without the new feature:

With the new feature:

Facebook has stated that this visual enhancement is the main purpose of the new status update feature. And indeed, this capability will help set it apart from character-only Twitter. However, it’s hard to ignore that the new emoticons represent an enormous potential boon for data collection purposes. Were the feature to be used regularly, status updates could be made searchable (it’s difficult to do this with natural language updates) and would thus provide valuable information about Facebook users’ preferred products. Given that the feature was successful enough in its invite only phase to be applied to the whole of Facebook, it may just stick around long enough for us to find out.