This is what it looks like when the Wheelhouse PPC Team takes over management of a client’s account. Cost is dropping by 50-plus percent, traffic is rising by 100% and Return On Ad Spend rising: 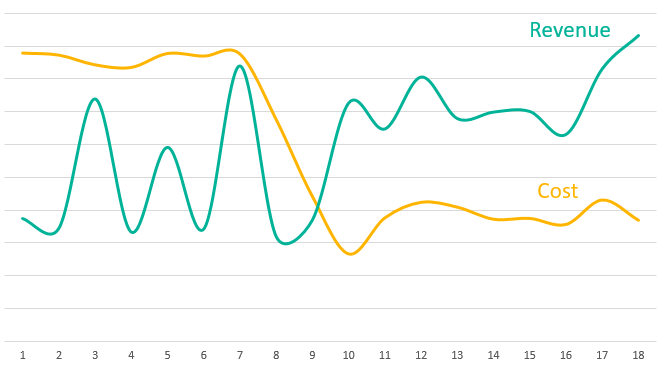 I see new variations of this chart all the time – and I love it.

Our PPC team uses a variety of tactics honed over years of managing performance-driven PPC accounts. Today I want to share one, quite powerful tactic hiding in plain sight, disguised as a mundane account setting: ad delivery options.

The delivery option campaign setting is provided by Google to enable advertisers to specify the pace at which their budget should be spent in a given day. Should your ads be shown for all relevant queries as quickly as they occur (“Accelerated” delivery) or should the budget be spent evenly throughout the day to avoid periods during which no ads are showing (“Standard” delivery)?

When configuring this setting, Google’s Adwords interface recommends “Standard” delivery, meaning ads will be shown evenly throughout the day and budget will be spent at a rate that ensures it lasts for the entire day. For most advertisers, this seems to make sense, but it’s almost always a big mistake.

Google recommends “Standard” delivery because it’s good for Google – and following that recommendation is almost always a bad decision.

When you configure a PPC campaign, you establish bids – the maximum price you’re willing to pay each time a user clicks on one of your ads. When campaigns are configured for “Standard” delivery, Google delivers “clicks” throughout the day (typically at or near the bid you set), depleting your daily budget at an even and continuous pace.

This approach works great … for Google. They get to consume your total daily budget at or very near the bid you set, and they don’t have to show your ads for all relevant queries – meaning they can preserve query volume for other advertisers and maximize their own revenue.

For advertisers though, using “Standard” delivery is a problem in that it hides the increased budget efficiency, traffic and revenue that can be driven by careful bid management.

I’ll clarify with an example.

If You Choose Standard Delivery 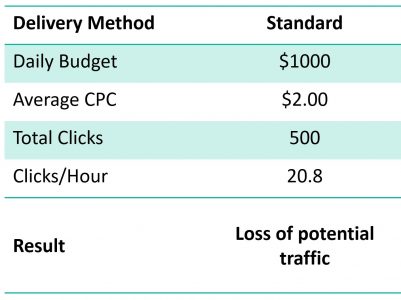 All good, right? Not right.

In practice, this delivery configuration results in the following:

If You Choose Accelerated Ad Delivery

Let’s refer again to our example, this time you choose “Accelerated” rather than “Standard” delivery. We still have the same budget of $1,000, but that budget is now exhausted at a rate equal to market demand (combined with our bid, QS, etc). Your budget is consumed by 2:20pm – about 60% through a 24-hour day:

Why is it useful to know that your budget is consumed by 2:20pm? Because this reveals that market demand is greater than your current bid/budget combination allows. It turns out that advertisers can often capture much more of that market demand, simply by reducing bids and testing the elasticity of the keyword auction:

Wheelhouse uses the period of the day not covered by our original budget (40% in this case) as a rule of thumb for bid reduction. This data is taken from a real-world example – and the results are clear. In this case, the fixed bid of $2.00 combined with “Standard” delivery was hiding both market demand and cost efficiency in the auction. Changing the ad delivery method surfaced demand and allowed us to test bid reductions to maximize budget efficiency.

The end result: we increased traffic by 60% – all for the same daily budget!