For this week’s link roundup I wanted to share some interesting content that was recently released in the SEO community. 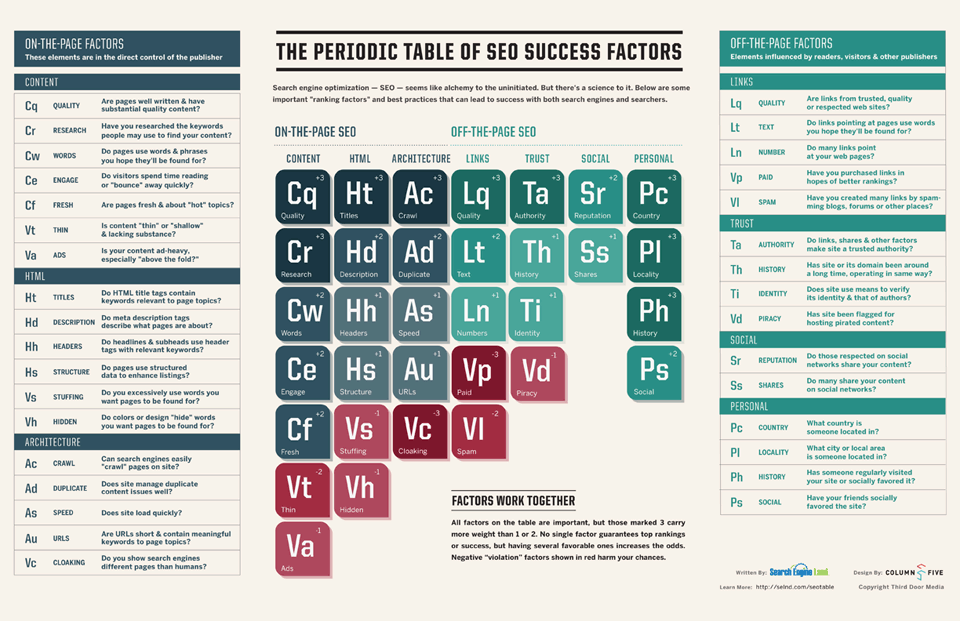 I can’t even explain how excited I was with this take on SEO ranking factors. It might sound nerdy, but the clever use of a common visual (the periodic table of elements) coupled with complicated information to explain (SEO ranking factors) makes this content clever and valuable. It’s an infographic of sorts that both impresses me with its execution and annoys me that I didn’t think of it first. Kudos to the geniuses over at Search Engine Land for coming up with it.

The folks at Searchmetrics released their 2013 report on what sets well-ranked websites apart from the rest. The information is dense, but nicely communicated and displayed. I was surprised with how much social media influences search engine results, which shows to what extent platforms like Facebook and Twitter are changing online marketing.

Our inbound marketing team has been going through Paddy Moogan’s new e-book, and I have to say I’m quite impressed. The book is easy to follow and a great resource for anyone who needs a complete overview to SEO and link building. I haven’t finished it yet and hope to write a more complete synopsis on it later, but if you want to get a solid handle on SEO and link building, this is a great place to start.

Apparently, clever re-purposing of well-known icons has been on my radar lately. First we had the Periodic Table reference listed above, and now the Ten Commandments of SEO featuring Matt Cutts. Props to Steve Toth for having the courage to share, because if Cutts is anything other than flattered, he could potentially lock TechWyse away in its own indexing center where no combination of long tail keywords or advancements in Google Maps would ever find it.

How cool would it be to be a professional Google Trekker? The program is open to organizations around the world, so if you’re enticed by the prospect of backpacking across distant lands to benefit Google’s mission of documenting the planet, click here.

Were you impressed with a specific piece of helpful SEO content this week? Share it with us in the comments below!

One response to “Link Roundup: A Week of Awesome SEO Content”