I’ve been hearing a lot of talk about the music streaming service Rdio recently–so much that I thought it was new to the scene. It’s not, alas—I’m just out of the loop! Rdio has been out of beta since August of 2010, but it has remained largely overshadowed by Spotify and Pandora—probably because it’s not free. The service is currently offered for $9.99 a month for mobile/web access and $4.99 for just web access. (Spotify requires a paid subscription, as well, but allows non-paying users a small number of free listening hours a month).

As for why it’s been getting more press lately, Rdio recently updated their mobile app to include a “Song Station” feature that allows you to build a radio station based on a particular song—much like Pandora, except that Rdio is ad-free and allows unlimited skips. The recent press inspired me to take a quick look at Rdio. Read on for my findings:

You can use Rdio through your web browser or via its desktop application. Using the desktop version allows for iTunes importation, and this is where Rdio really shines. Your tracks can be organized by album or artist, with album artwork appearing alongside each track (just like in iTunes).

The social angle of Rdio is also excellent. It provides more or less the same features as Spotify—it runs through Facebook, allowing you to follow your friends as well as celebrities, record labels, radio stations, and anyone else with an account, and gives you acess to their playlists and libraries. The main difference, once again, is aesthetic. Compare the social page in Rdio to that of Spotify: 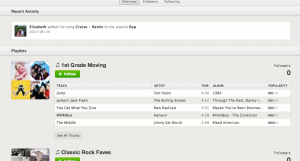 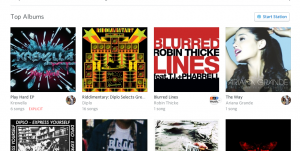 I personally prefer the layout of Rdio, which allows the album, rather than the user, to take center stage.

Spotify has kindly included a feature that allows users indulging in guilty pleasures to activate a “private session”. Private session songs won’t be shared or appear on your playlist. Rdio has yet to include such a feature.

Rdio’s appeal primarily lies in its social media integration (the ad free listening is an added bonus!), aesthetic appeal (a cut above Spotify, in my opinion), and its compatibility with your iTunes library.

So, will Rdio overtake Spotify as the go-to music streamer? It’s tough to say, as Spotify Social is on the horizon. While Rdio’s social features are visually appealing, they don’t provide a novel social experience, so if Spotify Social is a success, things could get very interesting.