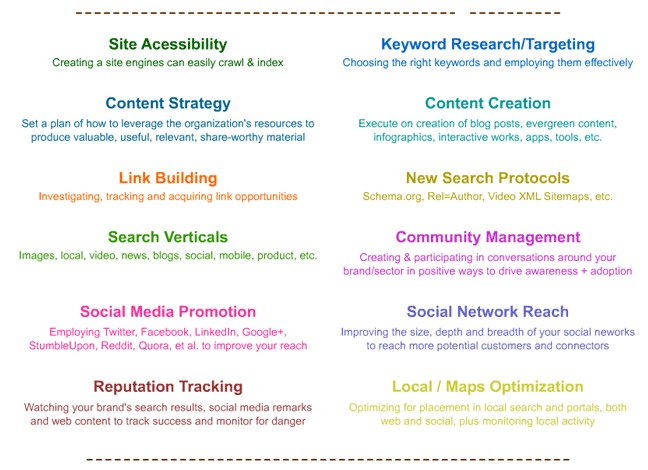 Rand Fishkin said it back in 2011: “the job of the SEO has been upgraded to an organic web strategist.” It was true back then and, with the roll out of Google Panda and Penguin in 2012, nothing is truer as we enter the new year.

The new role involves a mix of content creation, social media promotion, community management, local optimization and more. Public relations is also rapidly adapting to the digital world, as much of a company’s success and ability for promotion lie in its product promotion, connection with influencers, increasing brand awareness and visibility in search engines. Businesses touting expertise in just one of these areas won’t survive if they don’t adapt (and don’t get me started on the pop up social media-only agencies, either).

Econsultancy wrote about this dilemma within the PR world back in August and noted that, while we’ve seen PR quickly adopt social media and add it to their service package, they’ve been slower at doing so with SEO. I’ve personally talked to a few friends I have in the industry and have heard the same thing repeatedly – they know it’s important, but the hesitation to jump in, by and large, is still there.

This isn’t meant to be a PR-bash either, it’s an industry I love and one I come from. With that being said, there are a few solid things that SEOs can learn from them in return.
By nature, the PR industry understands the value of relationship building, the value in one solid mention from an esteemed publication, the need for outlet diversity and most importantly, getting in front of the right audience to increase sales (rather than getting a link to increase rank). The way I see it, if you chase links one day, you’ll be chasing them the next, too. If you build relationships with journalists, bloggers and editors, you can lean on those down the road.

Every SEO should be aware that Google is spreading the gospel about sincerity and relevance with links and what it considers quality vs. the low hanging fruit. From this stand point, it seems as if PR may still have the lead, barely.

There is still strong debate that PR doesn’t know they have the edge, the key to the “big links”, contacts at major industry publications and the relationships they’ve worked for years to build. If they’re not jumping on the SEO bandwagon for rank benefit, I would think they’d at least be interested in being able to prove results with real numbers, something they’ve traditionally been missing.

It’s time to ditch the silos of PR, SEO and even social media. Those that understand how they work together (and how they work separately) will be able to synchronously add value to the client’s bottom line. For now, these types of agencies seem to be the exception, rather than the rule.