We kicked off our Social Media Best Practices series last month with some tips for Facebook. Our second installment will discuss the ins and outs of Twitter from an SEO perspective.

As the second most popular social networking site after Facebook, Twitter is a platform you don’t want to neglect. The brevity of Tweets–140 characters maximum–means a small time investment per post, as well as a forgiving atmosphere for spelling/grammar errors due to the need for abbreviations—an added bonus! Here are our tips for helping your brand get the most out of Twitter: 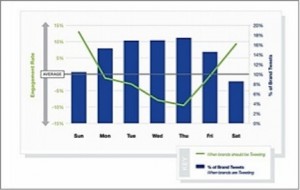 This applies to all platforms, but remember to observe before engaging—keep track of what your followers are saying and make a note of what seems to be working for well-engaged Twitter accounts in your industry. Stay tuned for the next installment in our Social Media Best Practices guide!

Was there a tip we missed? Let us know in a comment!