Women in Tech: Takeaways from the ChickTech and NYCDA Panel 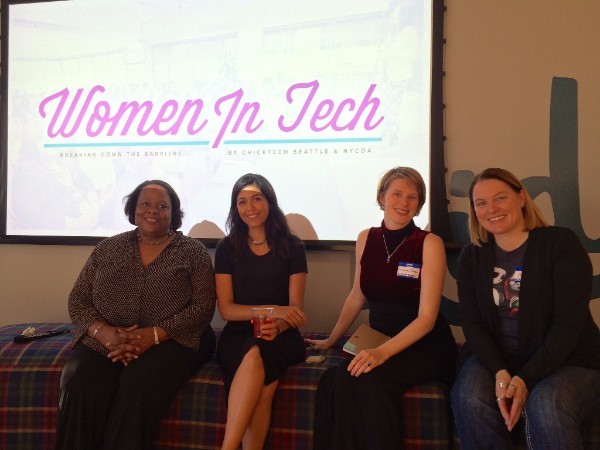 On August 3, a group of women from Wheelhouse attended a panel discussion hosted by ChickTech and New York Code + Design Academy Seattle (NYCDA). The event was designed for women in the technology industry, women interested in technology, and individuals interested in addressing the lack of diversity in the technology field. The panelists were selected for their unique backgrounds and entrances into the tech field. Panel members included:

The panelists all shared their stories and contributed towards answering questions from the crowd. Following are some of the main topics that were discussed:

To start off, “tech” as an industry is actually broader than many people realize. More than just coding and engineering, “tech” also includes project management, design, marketing, and a slew of other relevant job roles. This misunderstanding can present a barrier to young women who may be interested in the industry, but aren’t experienced or interested in the technical side.

The panelists emphasized mentorship and networking as keys to overcoming these stereotypes. By building awareness and creating opportunities for exploration, like ChickTech’s high school and careers program, young women have the chance to discover new passions connected to their existing skills and interests. Doing so also helps instill confidence in their abilities to learn new things and explore fields of study they may have otherwise overlooked.

Stephanie drew correlations between her engineering career and previous work. As a teacher, she had an urge to fix things and accomplish goals, but it took a long time to see the fruits of her labor. With coding, however, she sees results almost immediately. Relatedly, her linguistics background positioned her perfectly to learn coding languages and explore new opportunities for putting her problem-solving skills to good use.

Another barrier identified was the potential difference in communication styles between men and women in meetings, in leadership roles, and in providing and absorbing feedback.

To overcome communication barriers, the panelists found value in having both male and female mentors, to broaden perspectives and help diversify their own communication skills. During the Q&A, they also shared positive experiences involving ‘male advocates’ in the workplace — men who not only ‘supported’ gender balance and diversity in their workplaces, but who made an effort to ‘advocate’ for equality in the workplace. The panelists emphasized the importance and effectiveness of “using privilege to empower” — for example, a male co-worker pointing out gender imbalance to another male coworker.

The discussion among panelists sparked a series of audience questions for the group — ranging from job hunting, to balancing “femininity” in the workplace, and ways to succeed within a male-dominated team. While most of the time there was not one simple solution, there were many positive stories shared about overcoming issues with time and persistence.

While attending this event we learned the importance of vocabulary (and how the way men and women communicate new vocabulary and ideas that we found to be valuable when discussing diversity issues in our workplace.

“Echo Chamber”: Can be described as any setting or group where all members agree with each other. This can happen unintentionally or intentionally. When members of a group are similar, they tend to value and support similar ideas. So when an outsider brings a different opinion or view, it can be seen as wrong by the majority instead of considered equally.

Erica Baker is an engineer at Slack who recently joined a group of Silicon Valley women devoted to sharing data about diversity. Baker explains why it’s important to be inclusive in the tech industry and work against the echo chamber: “I feel like everybody in tech, as far as I know, is trying to build a product for the global economy. If you’re going to build the best product for everybody, you’re going to need everybody in the room.”

“Implicit Bias”: Also known as implicit social cognition, implicit bias refers to the attitudes or stereotypes that affect our understanding, actions, and decisions in an unconscious manner. In other words, when we are “used” to seeing certain types of people (or personalities) in specific roles, we tend to trust them more and even subconsciously validate them more than others. When individuals within a group ignore their implicit bias or are completely unaware of its existence, it can hinder the experience of all employees within the workplace. Examples of implicit bias can affect both men and women, as described below:

“Alpha Female”: Can be used to describe a woman who has reached a height level of leadership in her company. When a woman is the only female among her peers, it can cause her to become stuck at a survival level rather than a leadership position. To survive, she adapts to become “one of the boys” and consequently holds back other women, limiting their chances of earning promotions within the company. Sheryl Sandberg recently co-authored an article, The Myth of the Catty Woman, discussing this phenomenon and the progress made to overcome it.

My Takeaway, as a Woman in Tech 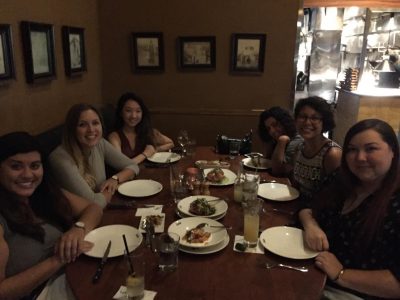 We all have the ability to be successful in today’s workforce, but everyone must take responsibility for building awareness around gender and diversity imbalances in technology fields (and, to a greater extent, society in general). Thankfully, there are plenty of opportunities for change. For girls and young women, it’s especially important to be intellectually curious and have the confidence to learn new things, even when there are challenges. Laura Ulmer, one of the panelists, said, “don’t let your worst critic drive your direction. Be able to stretch yourself to discover new opportunities.” For women invested in their careers, it’s important to empower female peers through mentoring and networking.

I was very engaged during this event; you could felt the energy of the audience, even when the discussion continued over an hour past the schedule. As cliché as it sounds, there was a camaraderie in the room—and I thrive in this type of environment. Women were sharing their challenges, others asking for help with career advancement. An HR professional attending the event even interrupted the Q&A session to pass her business card to a woman looking for a job. It was a positive environment, an inspiring example of what we as women can build for each other.

It was refreshing to see so many women come together simply to “be helpful” and support each other. It reminded me of our company’s own value of helpfulness! I was proud to attend the event with my co-workers. Many women stopped to chat with us after the panel discussion, thinking we were a breakout group. When they learned we were all from a single agency, they were pleasantly surprised and congratulated us on recognizing these issues together.

We are looking forward to building on the gender equality discussions we’ve been diving into this year. To continue the momentum, we’re planning to attend another event next month: Bridging the Gender Gap in the Tech Industry (hosted by Snapchat). We invite you to join us!